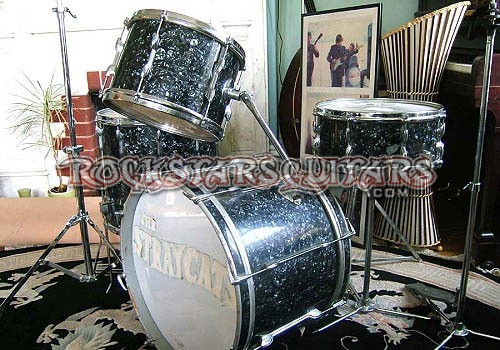 Keith Moon’s 1960’s blue/black pearl finish Premier drum kit, used in many of the music scenes in the David Essex movie “Stardust” (1974), starring Keith Moon as J.D. Clover, drummer with Essex’s band the Stray Cats. David Essex was a number 1 Billboard pop artist at the time. The drum kit is used throughout the film with two different logos on the bass drum. The original, although faded, “Stray Cats” logo is glued to the front bass drum head, and on the rear bass drum head there is a glue outline where an identical logo was fixed also. Presumably the two logos were removed to fix to the heads of Keith’s gold kit for that concert scene and then one re-fixed here, This logo is an original from film production, and not a replica. The production company, including David (now Lord) Puttnam, sold the kit to an assistant director, Charles Marriott, after filming. There is a message from Lord Puttnam’s office confirming his employ on the film as assistant director (2nd or 3rd unit). In the 1980’s Mr. Marriott sold the kit to Brett Ascott of band the Chords, who owned it until this year when we purchased it. In 1995, Bonhams of London catalogued it for an auction sale, but due to a reputed price error in the catalogue, and lack of promised photo illustration, the lot was withdrawn before the sale. Neither of the subsequent owners after filming have used the drums, preserving the condition, especially of the heads and hardware. The “Stray Cats” band in the Stardust movie were the vehicle for the whole story, and very important visually, featuring on posters, and, along with this Premier drum kit, on lobby cards. This is a very rare chance to own a full drum kit played by Keith Moon in his prime, and captured in high quality in many scenes of a major movie! Completely original, and a must for any serious Who or Keith Moon collector. There are no more out there for sale! Comes with a letter from the assistant director Charles Marriott, an email from Lord Puttnam, and a letter from to Brett Ascott. Also comes with photos of Keith playing this kit and an original 11×14 1974 Stardust lobby card for the film with Keith pictured playing the kit. Please call for price and details.