Who we are… and what we can do for you! Rock Stars Guitars® was founded in 1996, when Greg Dorsett and David Brewis met and realized they both had a fanatical interest in guitars as well as significant personal collections of authentic rock memorabilia. Together their collections benchmark some of the most explosive moments in rock and roll history. Rock Stars Guitars® is the first place players call if they had an old guitar to sell; but many artists were unaware that tour gear and stage equipment is becoming highly collectible too. We are proud to broker sales of guitars or gear between the artists and the collectors who want to own a piece of Rock and Roll History. Some fans and collectors were given keepsakes by famous stars decades ago, and don’t realize what their prize could be worth.

Since 1996, Rock Stars Guitars® has built a solid reputation in the Rock and Roll Collector’s world. We sell only authentic instruments and stage equipment. Everything we sell is backed by hand signed letter of authenticity from the artist’s themselves or their management/technicians, or backed with photographic or film material.

We also handle consignments. Please contact us to discuss your instrument or item. Greg Dorsett was a roadie for Southern Pacific (members of the Doobie Brothers and Creedence Clearwater Revival), and while on tour, he made lasting friendships with some of rock and rolls greatest legends. While feeding his obsession for Rock and Roll, Greg established himself as one of California’s premiere Vintage Gibson SG collectors and an expert and collector on John Birch Guitars of England.

Across the pond, in the United Kingdom, after working in vintage guitars for several years, David Brewis was winning awards for producing rock and roll classics for Prefab Sprout and The Kane Gang. While working closely with rock’s most awe-inspiring artists. Personal and trusted relationships were forged throughout the industry. 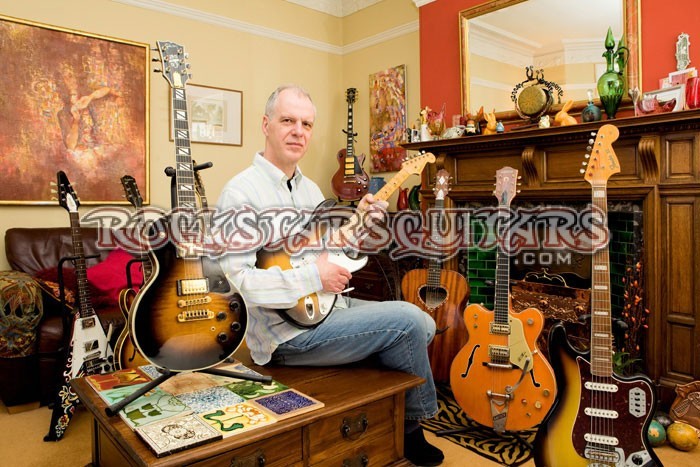 David Brewis has been involved in the Jimi Hendrix collecting world since the mid-1980′s when he purchased a Gibson J200 from Chas Chandler, Jimi Hendrix’s manager. The guitar was a 1968 model, and Chas recalled it being given to him by Jimi and Noel Redding in New York in 1968. Dave used the guitar on some recordings with his band The Kane Gang, and struggled for a while, unsuccessfully, to get the guitar’s neck to straighten out. It became so difficult to play that Dave eventually consigned the guitar to a Sotheby’s pop memorabilia auction, where it sold as a Slade/Jimi Hendrix guitar (it had also been played on a record by the group Slade, who were managed by Chas in the 1970′s). Keith Shadwick later documented this brief ownership in “Jimi Hendrix/Musician”.

Through owning this guitar, Dave was contacted by Tony Brown, who was running a Jimi Hendrix archive, and had recently sold the 1960 Zemaitis 12-string used by Hendrix in the 1967 “See My Music Talking” film. Through this contact, Dave’s name and guitar appeared in the index of “Electric Gypsy”, by Harry Shapiro and Caesar Glebbeek.

Dave then purchased, in the early 1990′s, a couple of Jimi’s Fender Dual Showman speaker cabinets (one of which is now at Experience Music Project in Seattle) and a Maestro “Rhythm’n’Sound” effects unit, plus a junk shop find of a Vox wah pedal and Dallas Arbiter Fuzz Face, both believed to be Jimi’s. 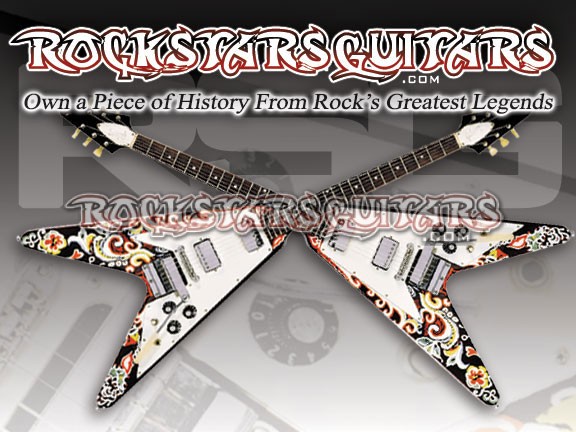 The biggest find was buying a 1967 Gibson Flying V as a used, refinished instrument, and discovering that it was the one painted and used by Jimi Hendrix in the 1960′s. The instrument was verified by Sotheby’s, and put in a sale, but did not sell, possibly due to having lost its original paintwork. It was later restored to its “painted” appearance.

During this time, interviews were conducted with “Univibes” magazine (the international Jimi Hendrix magazine), UK “Guitarist” magazine, many newspapers, etc. and was photographed for the “Classic Guitars of the 1960′s” book By Tony Bacon. This guitar was examined by many guitar authors, writers, and experts, to determine its authenticity. Shortly afterwards Dave purchased Jimi Hendrix’s Martin D-45 (also listed in “Electric Gypsy”) from Experience drummer Mitch Mitchell, and supplied information and features to many magazines, including the “Experience Hendrix” magazine, run by Hendrix’s estate. The Martin was sold to Experience Music Project.

In 1999, the Flying V was fully restored, having its finish and paintwork redone more accurately, and was shown at various international guitar shows. The guitar was featured in an exhibition at Boston’s Museum of Fine Art, and its image used, along with information supplied by Dave, in the book “Guitar – Music, History, Players”, by Richard Chapman, also USA “Guitar Player” magazine.

After forming Rock Stars Guitars with Greg Dorsett, other Hendrix-owned and used guitars and equipment were purchased from Experience member Noel Redding.

Dave, as a partner in Rock Stars Guitars, continues to be consulted by authors and auction houses in connection with Hendrix-associated material.

We are proud to say, these friends and industry contacts stretch back to the 1970′s and remain strong today.