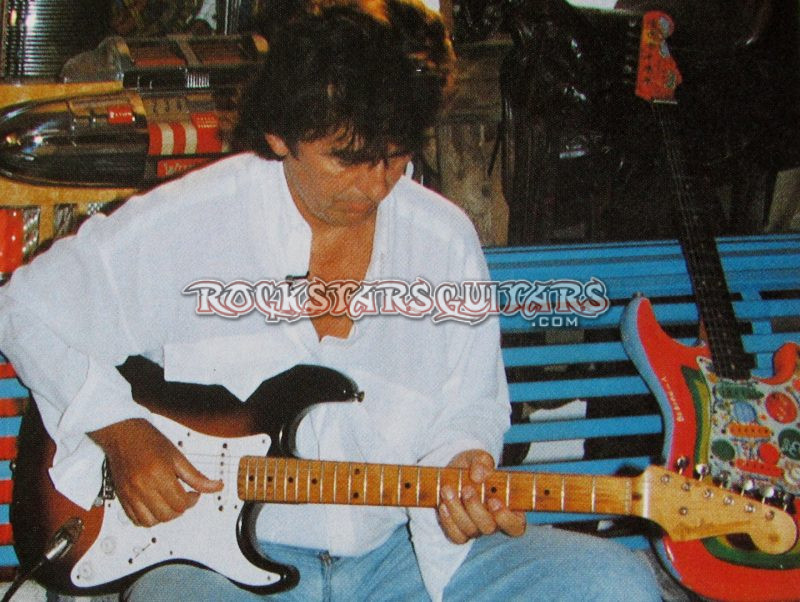 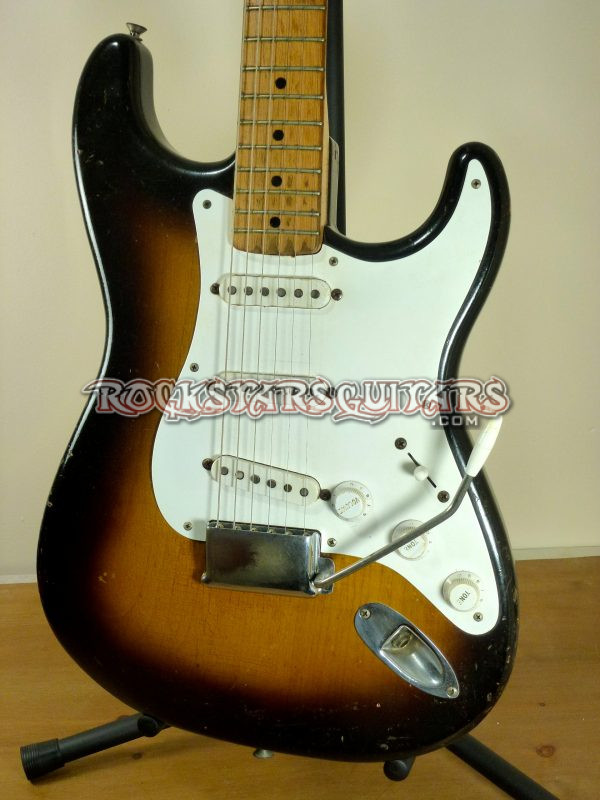 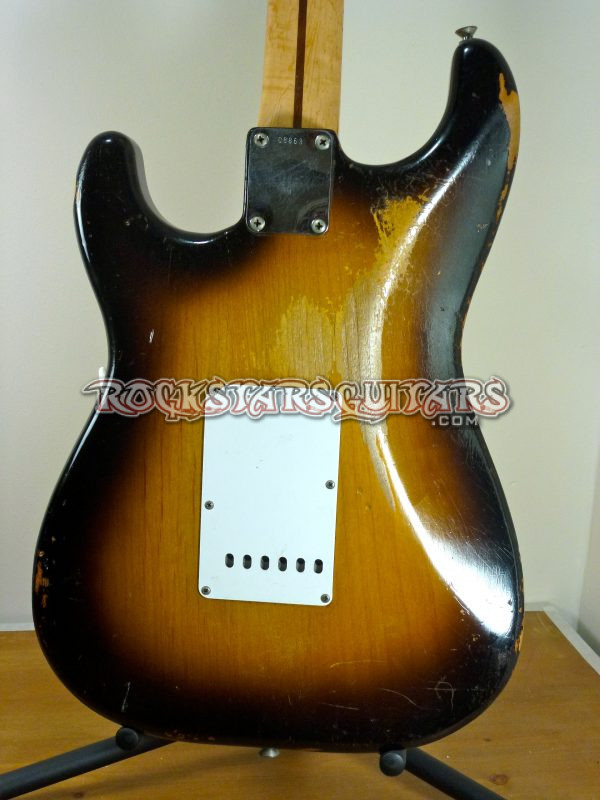 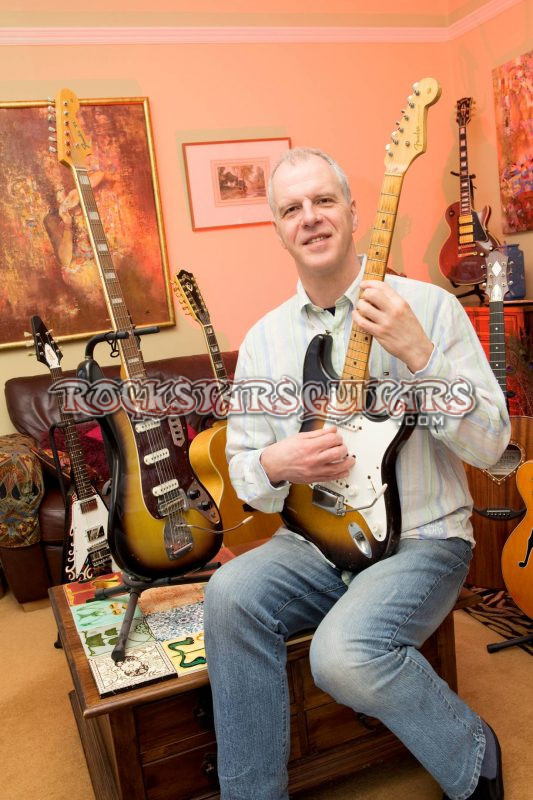 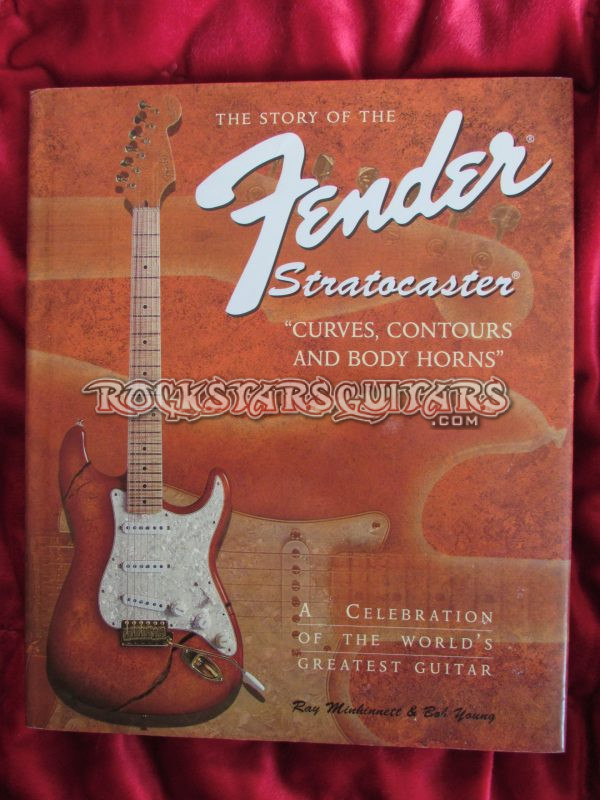 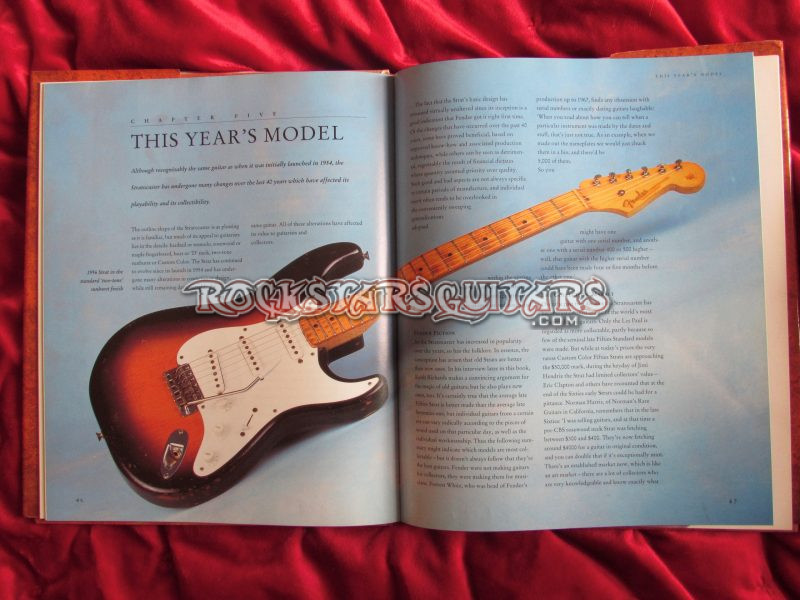 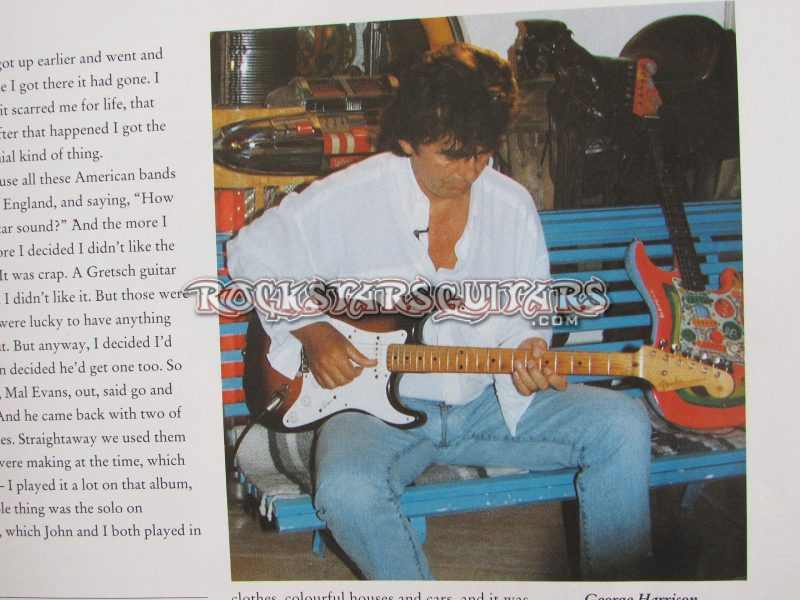 Dave Brewis, owner of Rock Stars Guitars, is pictured here holding his 1956 Fender Stratocaster that was used by George Harrison. When Musician and author Ray Minhinnet and Bob Young came to make a TV show and book in 1995 about the story of the Stratocaster, with help from Fender, they reached out to as many famous Fender players as they could for input. Most gave interviews which were used in the TV show, and highlights were included in the book. Eric Clapton, Jeff Beck, Nile Rodgers, Keith Richards and many more stellar players came forward, but perhaps none had quite the profile of Beatle and solo artist George Harrison. George rarely gave interviews about guitars, but happily brought along his famous painted “Rocky” Stratocaster to the film session, along with his guitar tech Alan Rogan. As “Rocky” was set up for George’s trademark slide playing, a nice original 1956 Fender Stratocaster was borrowed for the day, set up for regular playing. George described how he and fellow Beatle John Lennon acquired their blue Stratocasters on the same day, and used them in unison to play the guitar break on the Beatles “Nowhere Man”. He then played the solo from the song on the 1956 Stratocaster that he was holding throughout the interview.

This is featured in the TV show, and we have the whole show, dubbed onto DVD. The show was called “The Story Of The Fender Stratocaster, Curves, Contours, and Body Horns”, and the accompanying book had the same title. After filming was completed, the 1956 guitar was returned to its owner. We subsequently bought it and have owned it since around 2001. It is in the same original condition, with its tweed case, and comes with a copy of the book, and the DVD copy of the TV show.

This guitar was shown in the National Music Museum in Bologna, Italy, along side Rory Gallagher’s Stratocaster in an exhibition organized by Fender Europe. We’ve included a picture of it in the stand at the Fender exhibition at Bologna, Italy . It is currently on display at the British Music Experience in Liverpool, England.

The guitar was so nice an example of the mid-1950s Strat, that the book features it several times on its own in picture form, and also with George, in his section of the book.  It is 100% original with the tweed case. Guitars played by George Harrison are extremely rare, and we cannot think of another example where such detail is given, and where George plays a section of a Beatles song on film as a demonstration.

This is a truly unique opportunity to zone in on the wonder and talent of George Harrison, by owning a guitar that he played on film, featuring a Beatles tune. Please call or email for price.