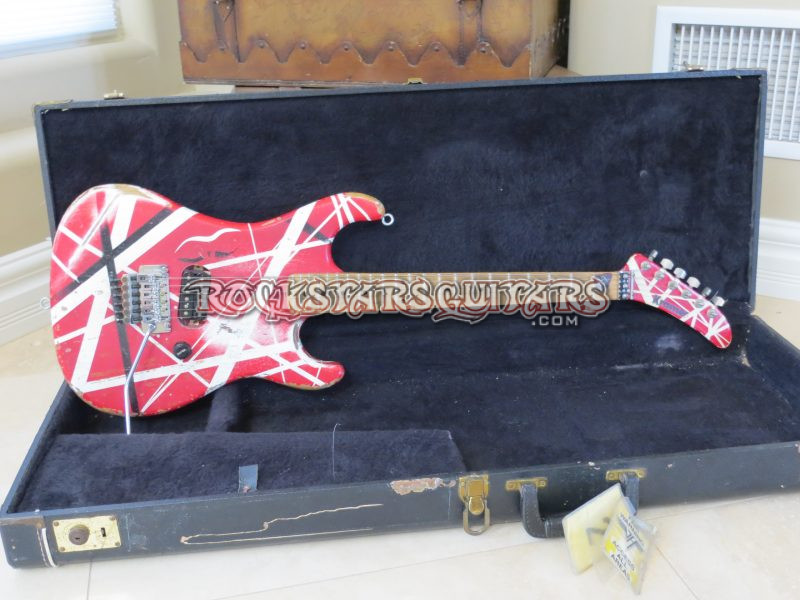 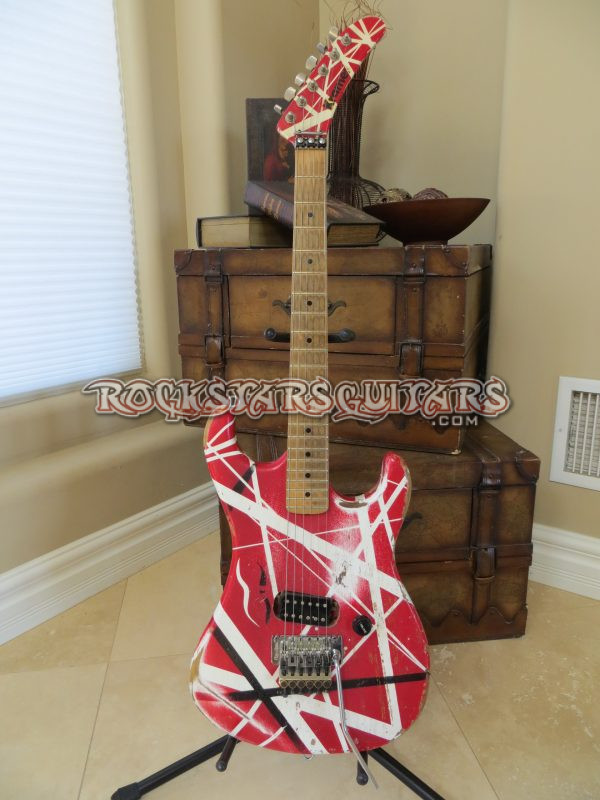 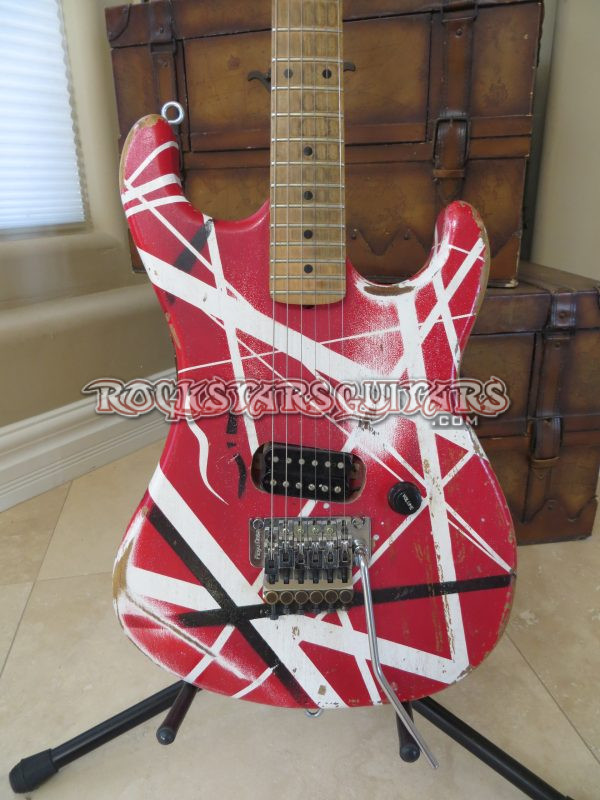 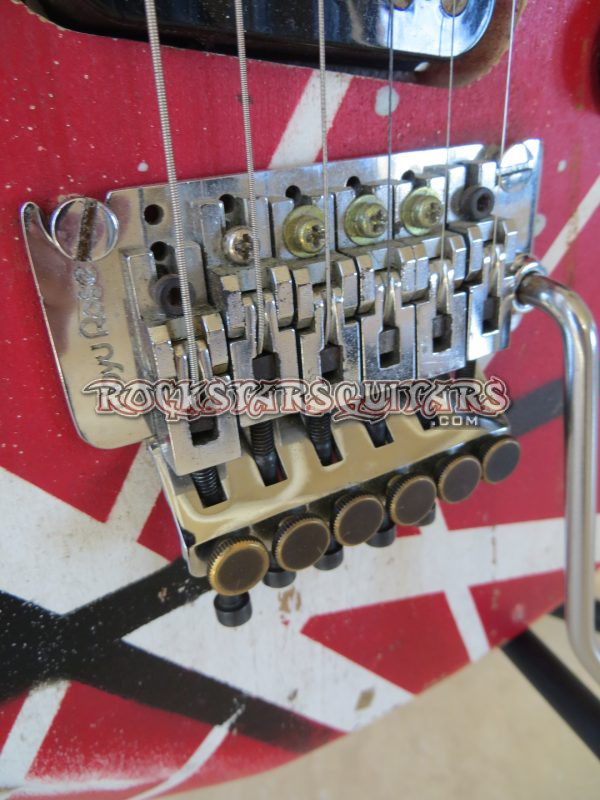 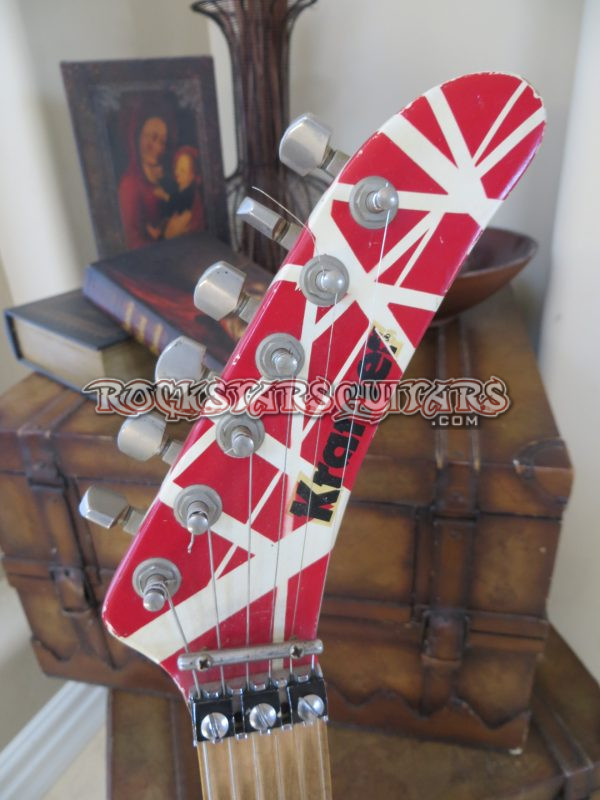 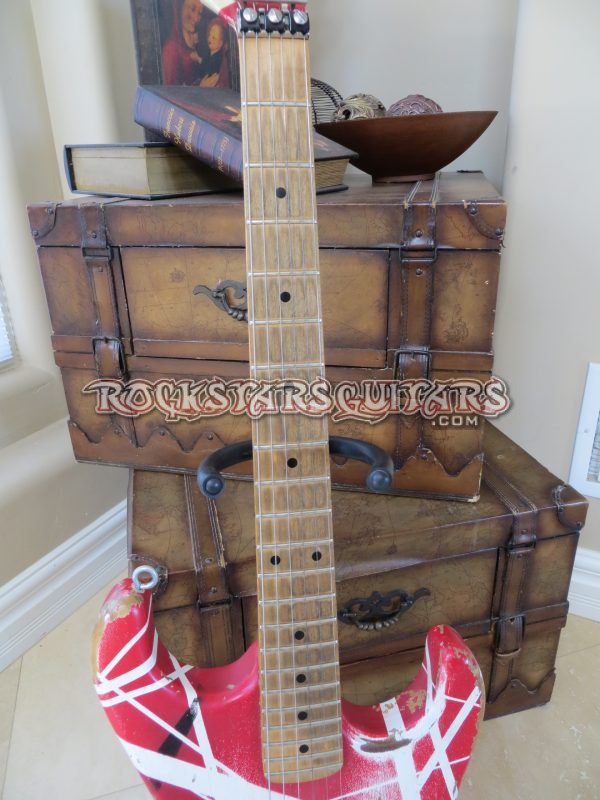 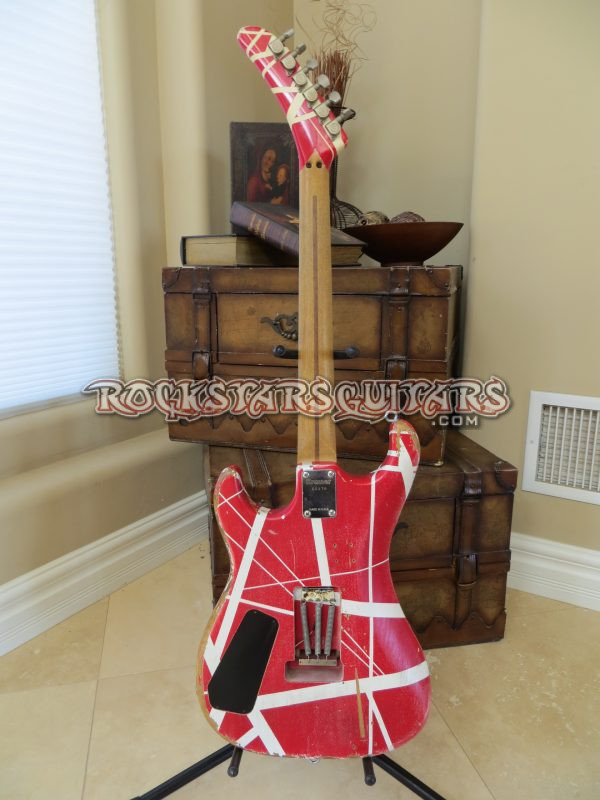 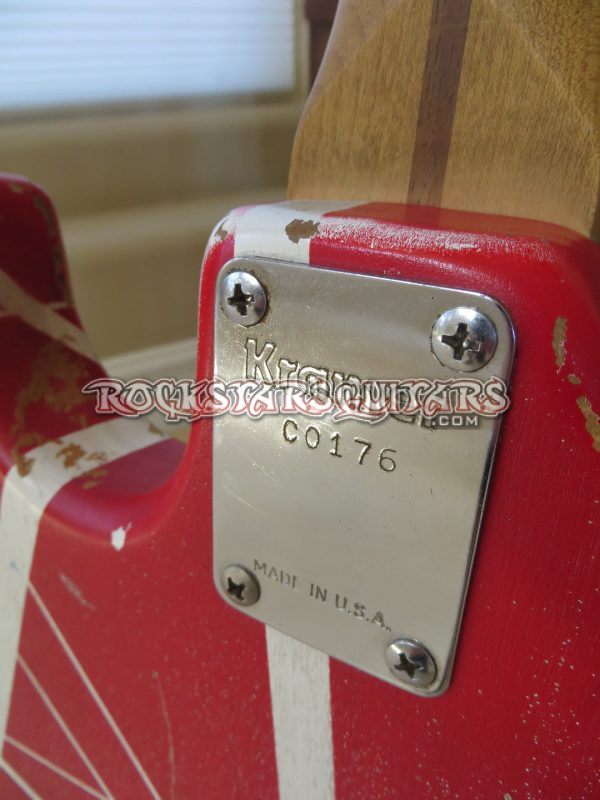 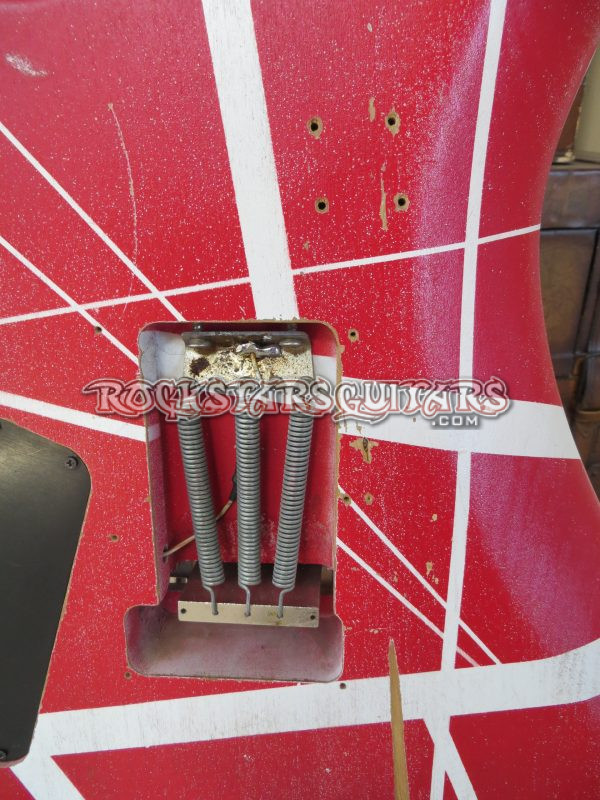 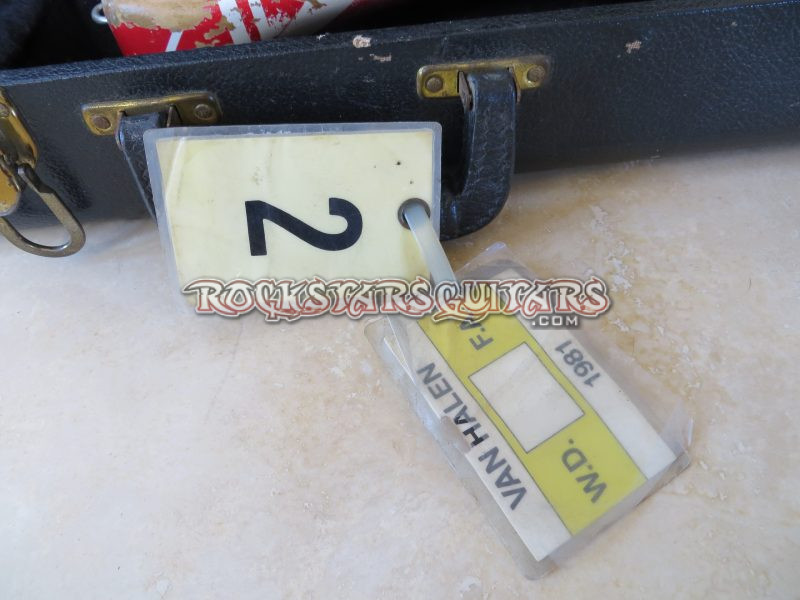 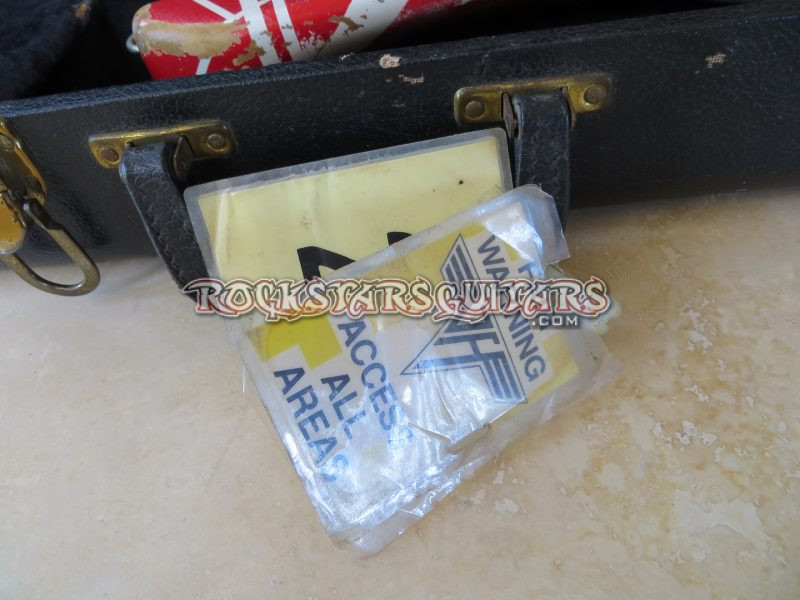 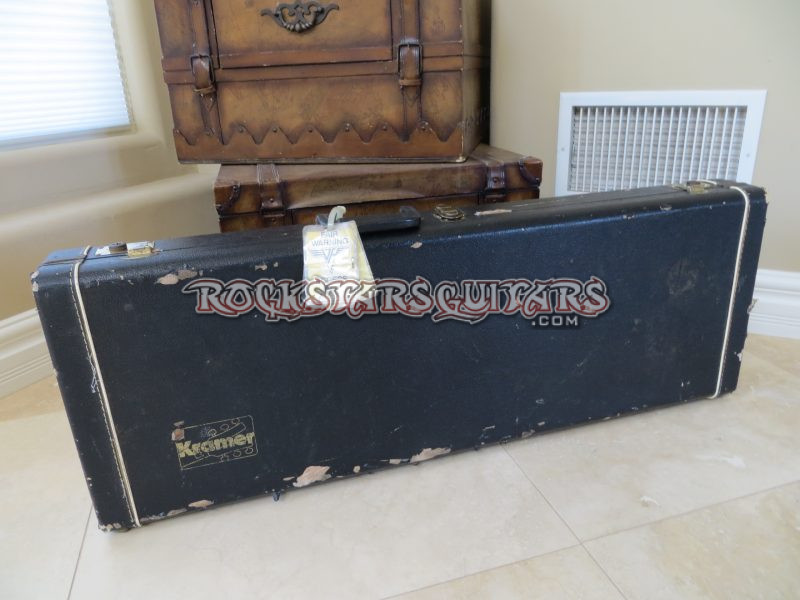 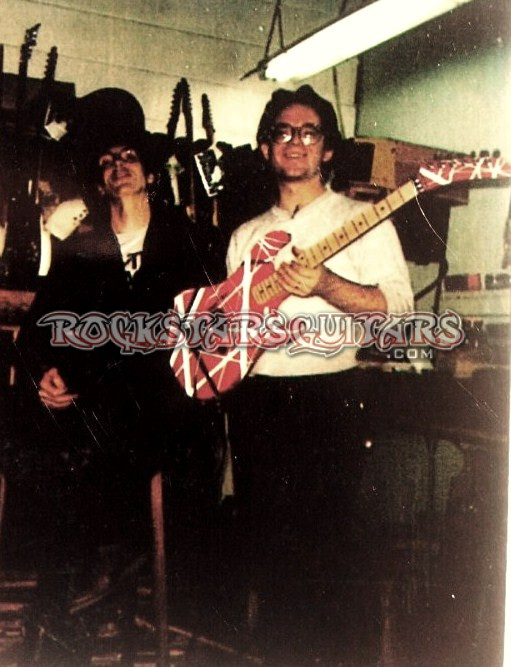 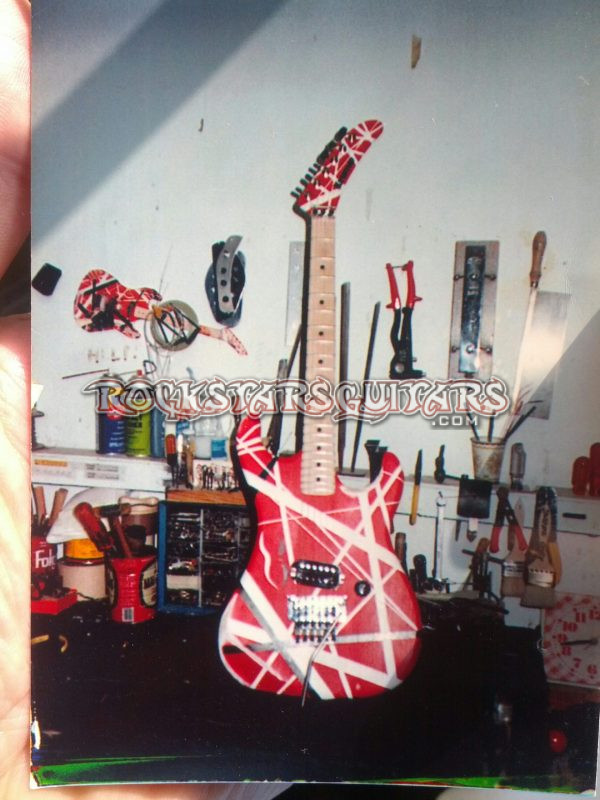 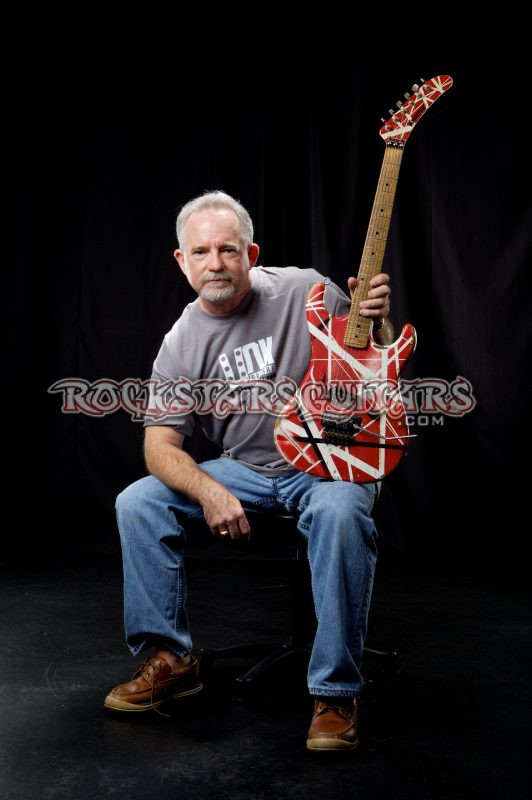 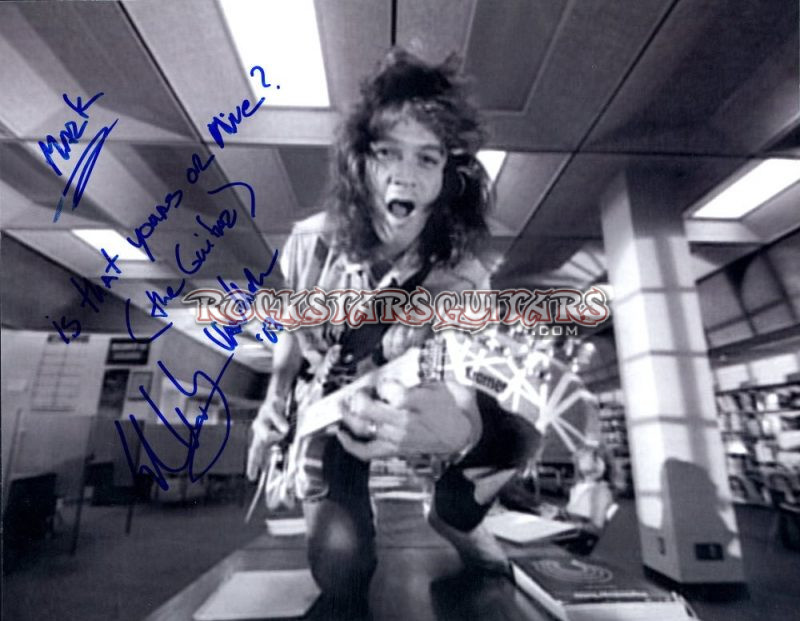 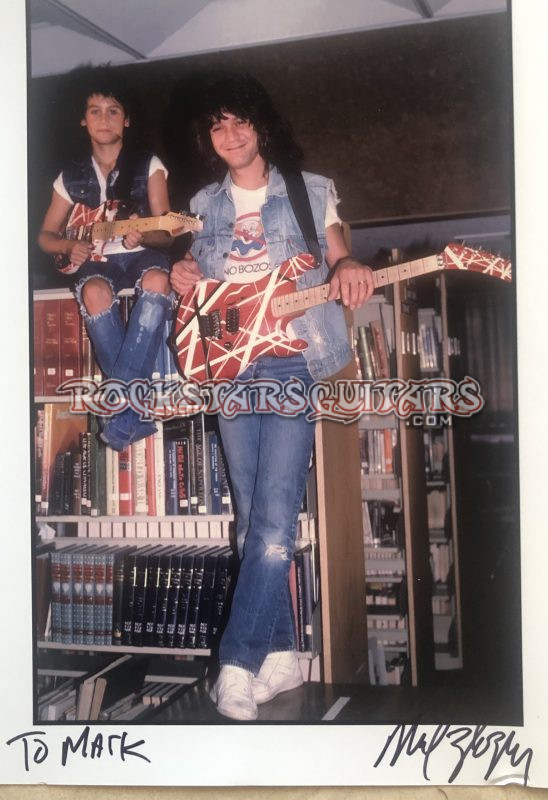 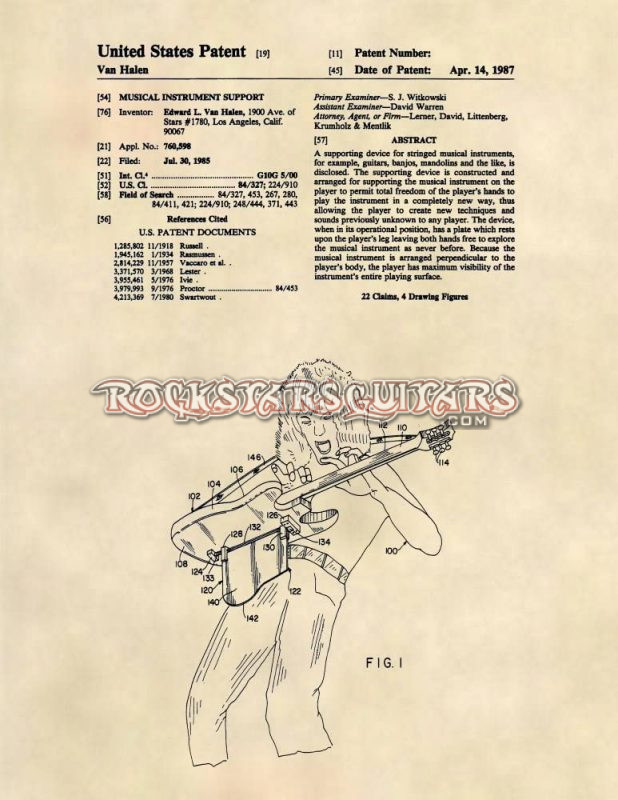 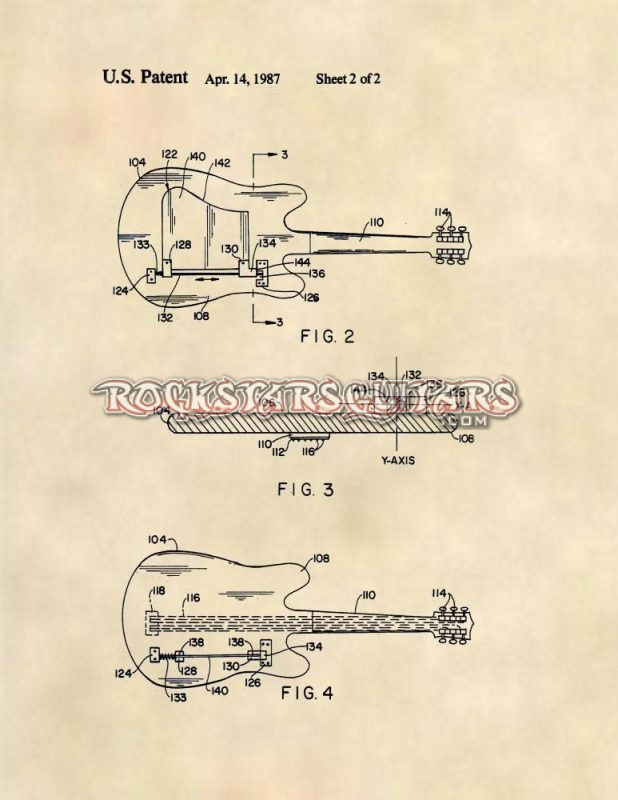 Eddie Van Halen. One of the greatest and most innovational guitarists of all time. Our condolences to Ed’s family and friends.

This guitar was owned and used by Ed Van Halen and was his one of his main guitars from 1983 through 1984. It was also used exclusively in the iconic 1984 music video “Hot For Teacher”, which is how the guitar received its name. Serial # C0176.

It was believed to have been delivered to Ed in January of 1983 and was built in late 1982 by Paul Unkert, who was an employee of Kramer Guitars. I know Paul Unkert personally, and he was very proud of this guitar. The HFT is made out of poplar wood and it is believed to be the first rear loaded striped guitar that Ed received.  Prior guitars built by Unkert for Eddie would have been top loaded and in essence, replica’s of Ed’s “Frankenstein.”  These guitars were later coined, “Frankenstrats.” The body is red with white and black stripes with a matching headstock and this color pattern is a known trademark of Ed’s.

Especially unique to the HFT and 5150 was another trademark invention Eddie developed.  The “taple top” (see attached in part, US patent illustration). This table top invention was intended to “prop” the guitar body in a horizontal position allowing Eddie to play it like he would a piano.  These mounting holes can be found on the back of the HFT.

In some point in time Ed gifted the HFT to retiring Van Halen drum technician and long time personal friend, Gregg Emerson.  Emerson would eventually pass the HFT to his nephew, Joshua Box.  Gregg also passed on to Joshua a suitcase with all of his personal tour items and also Ed’s and Alex’s personal items as well. In 2004 Box would sell the HFT to a music dealer in California.  And in 2004 a VH collector who knew Ed purchased this guitar and has kept it in his personal collection.

Here is some information pertaining to the song: HOT FOR TEACHER (the song) was front and center when the Parents Music Resource Center (PMRC) committee was formed in 1985.  PMRC was formed with the stated goal of increasing parental control over the access of children to music deemed to be violent, have drug use or be sexual via labeling albums with Parental Advisory stickers.  The committee was founded by four women: Tipper Gore (then wife of Congressman and later, Vice President Al Gore), Susan Baker, Pam Howar and Sally Nevius. They were known as the “Washington Wives.” Paula Hawkins presented three record covers (Pyromania, W.O.W. and Animal) and the music videos “Hot For Teacher” by Van Halen and “We’re Not Gonna Take It” by Twisted Sister, commenting” “Much has changed since Elvis’ seemingly innocent times.” On November 1, 1985, before the hearing ended, the RIAA agreed to put “Parental Advisory” labels on selected releases at their own discretion.  The labels were generic, unlike the original idea of descriptive label categorizing the explicit lyrics.

The guitar comes in the original hard Kramer case and it has two laminates around the handle. One is a V.H. Productions and Warner Brothers Records contact laminate, the other being a 1981 Fair Warning All Access laminate with a number “2” on one side. There are many photos of this guitar case pictured with Ed in 1983-1984 and the laminate with the number 2 can be seen in these photos. We also have dozens of photos of Ed with the guitar.  The strings may have been changed prior to its new owner, but the guitar has not been touched or altered in any way since 2004.

Also included with the guitar are two photos of Paul Unkert with the Hot for Teacher guitar. One was taken at the Kramer factory in 1982 and the other was taken in San Diego CA at Brent Haywood Photography. I was present at this photo shoot and personally brought the guitar to the studio. This was taken in 2008.  Also in 2008 Ed signed a video still photo of Ed playing the guitar from the “Hot For Teacher” video which reads ” Mark – Is that yours or mine? (The Guitar).  This is included in the sale. It also comes with a signed original photo print from the Hot For Teacher video shoot that was taken by Neil Zlozower. This photo is of Ed with the HFT Kramer standing next to the kid who played “young Ed” in the video. We also highly recommend Neil’s book Van Halen: A Visual History: 1978-1984. If you do not have this…get it!

In the past, we have sold some of the most iconic guitars in Rock N Roll. From George Harrison’s 1964 Gibson SG Standard, Keith Richard’s 1959 Gibson Les Paul Standard., Pete Townshend’s #3 1973 Gibson Les Paul Standard, Jimi Hendrix’s Psychedelic 1967 Gibson Flying V, and also many of Ed’s personal guitars. We also sold Ed’s 1991 Harley Davidson Custom Softail. And I have to say that this is an incredible piece of Rock history. Ed is one of the most influential guitarists of our time. This is one of the most significant and important guitars that I know of, next to Ed’s Frankenstein guitar and his 5150 guitar. The Hot For Teacher, with the suitcase and provenance, is a true find.

We are taking serious offers only. Email us or call.